Wow, what an amazing work: I love number 25! But it is one of the hardest caprices I've encountered. My first attempt at recording failed miserably because of the difficult second variation, and I had to try again during the next scheduled session. I actually love listening to the recording more than playing it. I'm not going to lie - it feels good to put it aside!

Besides the obvious challenges of the Second Variation where you have to alternate double-stops with single open strings I also found the Theme to be quite tricky. Campagnoli is quite clear that he wants the triple-stops to sound as one blocked chord, as indicated by the staccato markings. It is quite difficult to get this sound without a lot of extraneous noise. I was finally able to develop the sound I wanted with two specific techniques:
1. playing far away from the bridge (where the string angle differences are less) and
2. keeping a very rigid wrist and bow hand, which you can observe in the video.

The Third variation seemed like it should be a breeze after the second, but was very revealing about my shifting abilities. I found myself going back to some shifting basics as I homed in on intonation and the elimination of slides.

My favorite variation was the Fourth. If you had asked me to play this ten years ago, I couldn't have done it. But thankfully, the years of string crossing and bariolage work I have done, since getting into period Baroque playing, have really paid off. This one evokes the raw and joyful sounds of bluegrass music. 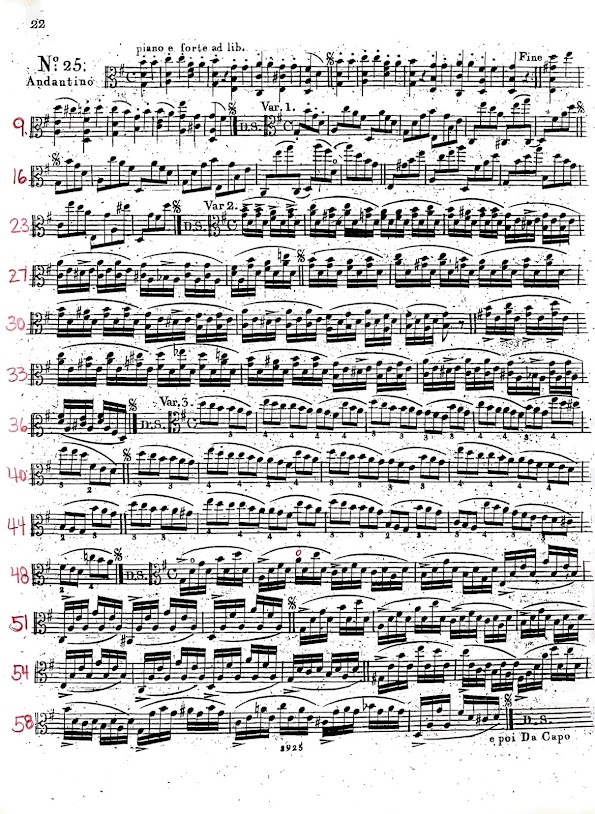