Caprice no. 33 is another favorite of mine. I chose to practice this in tandem with no. 17 for my first recording set. These pieces both inspired me with their longer, more developed forms.

I also love a good fugue, especially a minor fugue. As a violist, unless you regularly borrow from the violin repertoire, you probably haven't gotten many opportunities to play a solo fugue. A fugue written specifically for the viola is a treat indeed!


There are two main technical focuses for this caprice:

I play this at a quick pace, as Campagnoli indicates cut time in the score. Feeling in two helps with phrasing and direction, otherwise the melody can get stuck - particularly with the heavy chords distributed throughout the work.

Throughout the piece I have marked double up-bows in cases where the bowing wants correction, not slurs. I assume that Campagnoli didn't want slurs unless he specifically marked them. Therefore, two up-bows should still sound like separate bowing.

Note that Campagnoli doesn't mark any dynamic indications until the last three measures. Use your imagination to fill in the blanks. This was a common expectation for performers in the early classical period.

As the Theme is introduced three times, each more elaborate in texture, make sure it doesn't get buried in the texture of chords.

m.9  The starting note of the fugue (D) is at the bottom of the chord. To further complicate matters, this is a very tricky double-stop as it requires the fourth finger to extend as much as possible. I physically couldn't play all three notes at the same time, so I rolled my hand over to catch the top note, following the motion of the bow.


mm. 30-34  I experimented with this sequence by attempting to sustain all of the half-notes through the moving eighth notes. This proved unsuccessful for particular measures, such as the first two beats of m.31: it was impossible to play all of the notes in tune. I decided in the end it was better to sustain the half-notes as long as possible without sacrificing intonation,.

mm. 57-64  On the third beat of every measure in this sequence, there is a slurred sextuplet figure, the first note of which is marked staccato. This is a minor detail, but it should not be ignored! I think it's meant to show that the staccato note belongs to the four eighth-notes preceding it, whereas the following five notes in the sextuplet lead to the next measure.

mm. 66-72  This chord progression seems to take the place of a return of the subject, which happens in standard fugue form. Since there are so many repeated triple-stops, experiment with how you break the chords. I play the bottom of the chords on the beat from mm. 70-71, since the bass line is driving the melody.  Contrastingly, from mm. 66-67 I try to bring out the melody in the middle voice by breaking the chords less.

Campagnoli launches right into the coda from the development.

mm.72-75  A "down-up" bowing in each measure is too awkward and would give too much emphasis to the downbeat, which should mark the end of each measure's direction. I've marked the same direction of bow for each measure, but there should still be a break in sound between the first two eighth-notes. A decrescendo is nice, since one can assume that the fortissimo marking at the end of m. 75 was meant to be a surprise. 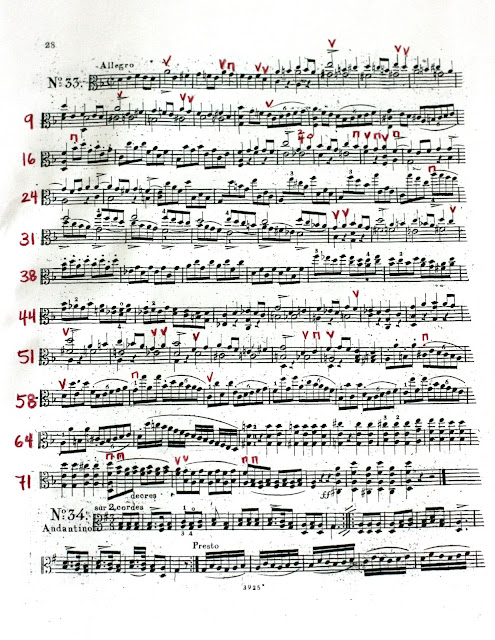