I fell in love with Caprice No. 17 when my teacher assigned it to me in middle school. My fascination with the work became one of the reasons I pursued this project: I wanted an outlet to perform it. Because the piece is my favorite, I’ve decided to post it first.

No. 17 is more than just a caprice, it is a delightful Theme and Variations with tons of action packed into four short minutes. Each variation is a micro-caprice with its own technical landscape to explore. While it is appealing musically, the work is also incredibly fun to play. Most of my practice time on this caprice and other early posts was spent holed up in the bathroom during my daughter's nap time, playing with a practice mute on and the door closed. I was working on this one in the middle of the summer and there were hot days when I craved the AC which was on in the rest of the apartment!

Throughout the entire piece, I attempt to keep the same tempo, adjusting slightly for
character. This allows for last two variations to naturally build up to an exciting frenzy at the end.


The difficulty of the Theme lies in the fact that you are expected to play the melody and accompany yourself with harmonic double-stops at the same time. I struggled with this, until I spent adequate time taking the melodic skeleton and practicing it alone, to establish the direction of the line. Then I added the accompaniment back in, and a comprehensive melody quickly followed.


Although it is not marked (Campagnoli rarely writes specific bowing technique names in his caprices) I believe this variation was intended to utilize a marcato bow stroke. This becomes clear when the bass and treble voices are separated by two strings, as in mm. 19-23, and other similar passages. Slow practice, stopping the bow after every note, and adequately preparing for the next note (both by bow and finger placement) will give a clean attack to each note. The bass notes are always more important, and should be more heavily weighted. Mm. 14-16 were a challenge for me with intonation, and the back-and-forth in hand positions!


This variation is tricky but incredibly fun to play. There are a few places where if you follow Campagnoli’s bowings, you will end up “backwards” but they will right themselves a few measures later (see mm. 41-44). This was intentional, so don’t try to change it! The stroke should be light and playful and come from on-the-string work. A slight lightening of the hand will enable the bow to bounce naturally.


This variation was the deal-breaker when I was contemplating whether to play the caprices on gut strings. I found I couldn’t get a good tone in 7th position on a raw-gut D string! Not to mention, playing without a chin rest posed its own challenges with the high positions.

I suggest going easy on the vibrato for this and all melodic passages in Camapagnoli. First of all, in a historical context, vibrato was used sparingly. Secondly, it is extremely helpful to practice passages like this without any vibrato for intonation, and then add it back tastefully. You will find you don’t need nearly as much as you thought. I have realized over the years that when I use a lot of vibrato, it is nearly always a sign of insecurity and reveals an underlying problem of poor intonation.


Fast passages have always been a major challenge for me. My tendency is to tense up, lock my bow arm, and anticipate the hardest passages, which always results in mistakes. I practiced this variation the most, trying all kinds of tricks to loosen up. One of the most helpful techniques I employed was to play it slowly, bowed backward. This helped me concentrate on string crossings and recognize exactly where they occurred. Another was to emphasize the important melodic notes, which occur on every eighth-note or quarter-note beat, rather than every 32nd- note. This was especially helpful at mm.73-74. The high “B” thrown in at m.78 is a cruel little twist for the left hand.


This variation will bring out the slightest weaknesses in your left hand and left arm position. Some of the chords are very tricky for intonation, especially if you play a large instrument and/or have a short 4th finger (my problems in a nutshell). If you have trouble extending your fourth finger enough to reach some of the chords, such as the very first one, try swinging your elbow in toward your body with the goal of always having a straight wrist when you play. You will see me doing this a lot during this variation. Ironically, I learned this trick not from a violist but from my Baroque violin teacher, Jörg Michael Schwarz.

There is more than one way to arpeggiate the chords, as indicated in the score above this variation. After playing around with ideas, I decided to go with the arpeggiation from the Peters edition. 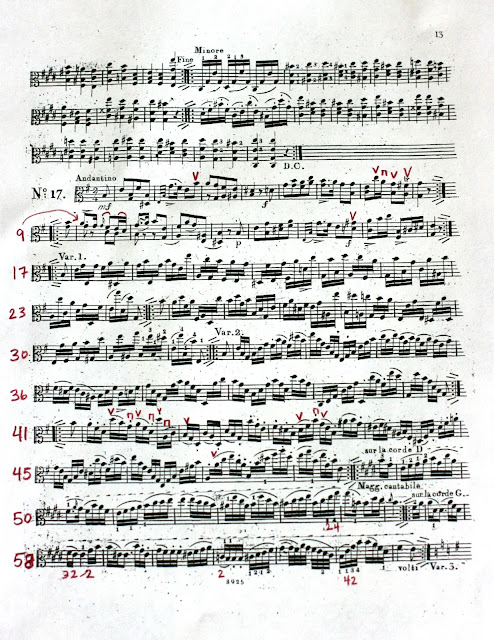 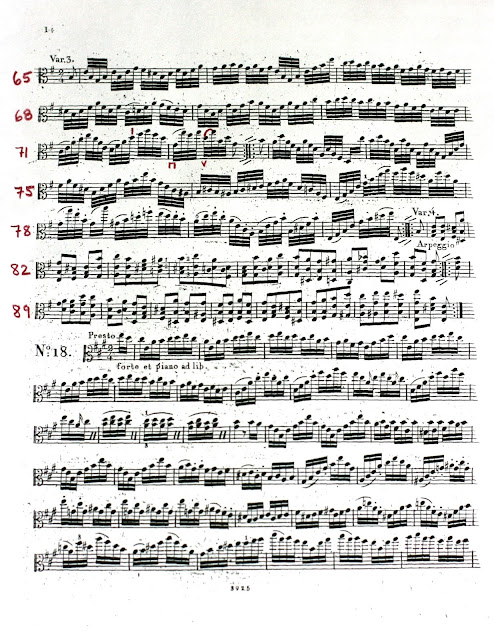