When preparing to record Caprices 1-4, this was the one that held me up and admittedly caused some anxiety for the recording session. The culprit was the jeté stroke, featured prominently at the beginning of the caprice. Having never played violin in my earlier days, I was excused from having to learn this stroke, and developed jeté phobia as a result.

So kudos to Campagnoli for believing that violists can do it too. It isn't the most practical, everyday manner in which we use the bow- but if you master it, you have really accomplished a hyper-control of your bow hand. At least that's how I felt once I got the technique down.

To practice the jeté stroke for this piece, I spent a lot of time on open strings practicing a semi-controlled bounce of the bow. The challenge is that the four times it happens, it is over an eight-note descending scale, each one a note lower then the last - meaning that your open string pattern will be slightly different each time. Of course the tension of each string affects the bounce of the bow differently, and therein lies the challenge. You have to know exactly how much to control the bounce of the bow each time you play a different scale. Furthermore, eight notes is a lot of notes!

Anyway, I first started with the basic stroke, practicing four notes of jeté on an open string followed by a long "landing" note. I then increased to eight notes. Next, I practiced the open string patterns from each scale in the piece. Finally, I had to let go of any real sense of control and just play it, because in the end this stroke is like a cat: not fully domesticable. (Cat owners, you know...)

At the end of the jeté section (m. 7), I chose to take a liberal pause before starting the section marked dolce. Starting on an open string seemed to harsh, so I went with a fourth finger for a softer sound and to keep with the bariolage stroke that follows. The entire section, building up to m. 17, is driven by the bass notes, and the high E's in m. 13 particularly need a light touch.

Our jeté friend returns in m. 17, this time in an easier format: slower with less notes. I had the best results starting it as an up-bow staccato and transitioning midway to the jeté stroke.

At the end, we once more end on a half-cadence. This one does not resolve into Caprice no. 5. However, maybe by this round I've just gotten used to the question-endings, but it doesn't seem as quizzical to me any longer: rather like the music just needs to float off into thin air.

After all the bowing struggles with this caprice, I have to admit: it has become one of my favorites to date! Isn't that often the case though. We love something more when we've had to work harder for it. 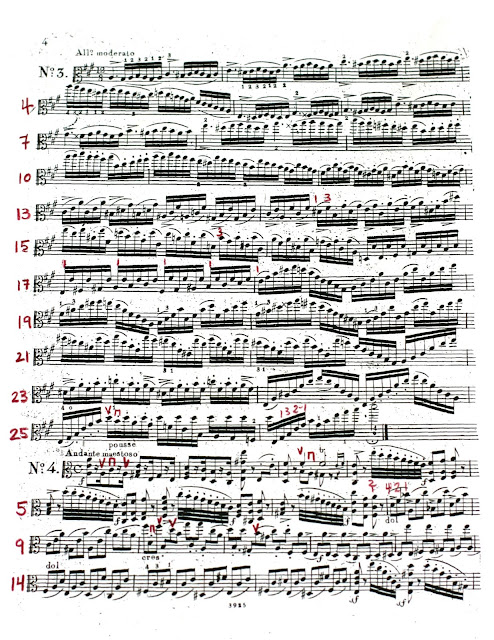 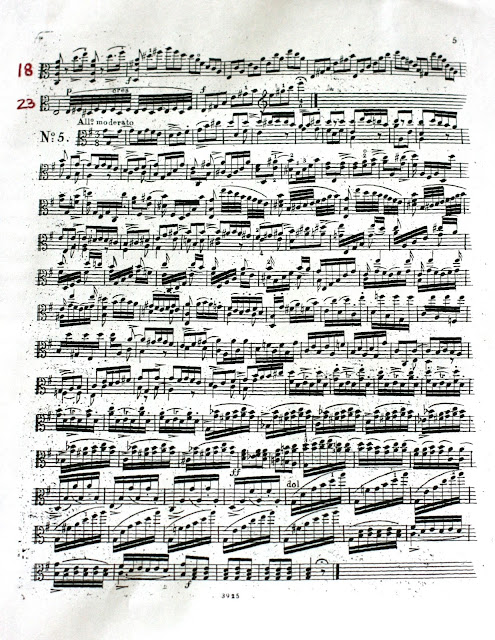