Caprice no. 2 is a loose semblance of a Theme and Variations. While short, there is still a lot of material packed into a few minutes, and I find it's a great all-encompassing etude for warming up and hitting your double-stops, triplets and bariolage.

The Theme (m.m. 1-8) has a song-like quality, and it is helpful to practice without the double and triple-stops to get an idea of the flow for the melody. It is quickly followed by a bariolage section (m.m. 9-16) in the relative minor key of e , which I think does well in a more hushed, mysterious tone, building up to the forte in m. 15.

Measures 17-22 are a bit curious with the break from the traditional eight-bar phrase to a four-measure phrase repeated, followed by a three-measure phrase (also repeated). The end of this section marks the end of the theme/variations, as the character, form and key shift going into the triplet section.

It helps to think of the piu moto (mm. 25-44) in groups of two measures, like it were written in 6/4 time. This will give the section more flow and also justify the up-bow that happens every other measure. The long winding chord progression hits many keys as every other measure resolves the harmonic tension that has built up from the last. The descending bassline from mm. 37-40 imply a natural crescendo that should continue until the sforzando in m. 42.

Notice how the piece ends in a half-cadence on an E major chord- leading us right into Caprice No. 3, which starts in A major. For this reason, I believe that the first few caprices might have been intended to be played or performed one right after the other: The first perfect cadence at the end of a caprice doesn't happen until no. 5!  However, a true V-I cadence only occurs between Caprices 1-2 and  2-3. The transitions between no.'s 3-4 and 4-5 are not as harmonically sound. 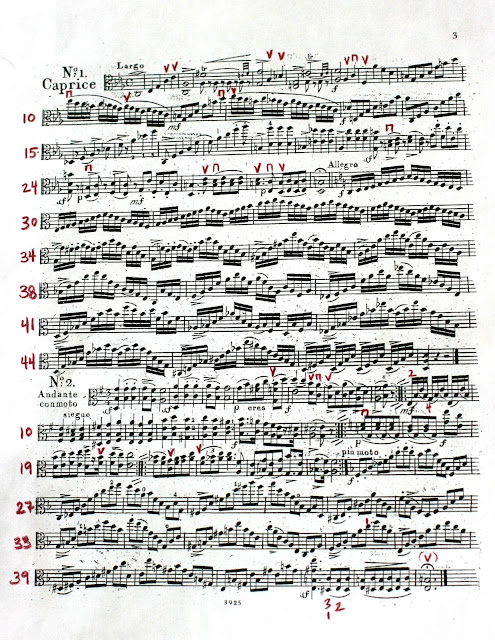